What Happened When Nissan Vehicles Took a Trek in Morocco?

Nissan celebrated the end of a successful year by taking a trek to the deserts of southeast Morocco to test out the off-roading capabilities of their most popular trucks and SUVs from around the world.

Which Models were Tested?

Not all of the Nissan models that were tested in Morocco are familiar to U.S. customers. In fact, only one of these vehicles is actually available for purchase in the United States. The other three off-road vehicles are sold exclusively in other countries across the globe. Testing a variety of models from the global market—not just the U.S. market— allowed Nissan to showcase the strengths of its vehicles on a global scale and pique the interest of customers around the world.
The four Nissan vehicles that were chosen to be tested in Morocco include the Nissan Patrol, the Nissan Terra, the Nissan Navara, and the Nissan Titan. The Patrol SUV is only on the market in the Middle East, the Terra SUV is available in China and the Philippines, and the Navara mid-size truck is sold across Asia, Europe, Australia, and New Zealand. The Nissan Titan full-size truck is the only model tested that is sold in the United States.

Morocco is an independent nation in Africa that shares borders with Spain, Algeria, and Western Sahara. In typical fashion, the Mediterranean climate of Morocco features both forests and dry deserts. The nation’s dry inland deserts served as the ideal environment to test out the true capabilities of Nissan’s most popular off-roading trucks and SUVs. 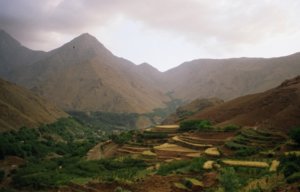 Although Morocco might seem like a somewhat random choice for testing out Nissan off-road vehicles to those who are unfamiliar with the exotic African nation, the deserts of Morocco are no stranger to off-roading. In fact, the Rallye Aicha des Gazelles—the Gazelle Rally—is a women’s off-road rally race that is held annually in the deserts of southern Morocco.
Nissan’s recent vehicle tests took place nearby in southeast Morocco, in a dry region of the nation that eventually fades into the monstrous Sahara Desert. The vehicles made their way from Errachidia—a Moroccan city in the Atlas Mountains next to the Sahara
border—to Erfoud—a town that is located about fifty miles southeast of Errachidia—and then from Erfoud into the sandy Sahara. The terrain over this path is a blend of pavement and dirt roads and takes drivers through mountain ranges and over sand dunes. This varied, rough terrain was perfect for showcasing the off-roading abilities of the four Nissan vehicles that were tested in Morocco.

All four Nissan off-road trucks and SUVs delivered impressive results in Morocco, but some of these models performed more smoothly in the desert than others.
#1: Nissan Navara
The Nissan Navara deserves first prize for the incredible off-roading abilities it demonstrated in Morocco.
The Navara is surprisingly lightweight for a truck of its size, which made it easy for this midsize truck to effortlessly drive over sand dunes in the Sahara. Its tires are heavy- duty and its body is raised high enough off the ground that the Navara was able to make it across the dunes without losing speed or getting stuck.
#2: Nissan Terra
The Nissan Terra showed almost the same level of performance as the Navara in the Moroccan desert, which is impressive—especially considering that the Navara is a midsize truck and the Terra is an SUV.
Other things that made the Terra’s performance in the sandy desert especially noteworthy are its ability to fit seven passengers at one time and provide a smooth ride for all passengers in the cabin—even while trekking over off-road terrain in Morocco.
#3: Nissan Titan
The Nissan Titan performed well in Morocco, but showed more resistance when it came time to plow through the deep sandy dunes of the Sahara. The weight of this full-size truck increased its risk of sinking into the sand and getting stuck.
Some caution was required on the part of the driver to maneuver over the dunes safely and ensure that the Titan’s wheels did not sink too far into the sand. The Titan was still able to make it across the desert, but the ride was not as carefree and effortless for the driver as it was for those driving the Navara and the Terra.
#4: Nissan Patrol
The off-roading performance of the Nissan Titan and the Nissan Patrol were very similar. Just like the Titan, the Patrol also had some trouble making its way through the sandy dunes of the Sahara once the off-road terrain got a bit trickier.
It was necessary for the driver of the Patrol to carefully balance the amount of power they applied with their current speed in order to keep the Patrol sailing smoothly over the dunes without getting stuck or sinking.